“Improving and Integrating European Ocean Observing and Forecasting Systems for Sustainable Use of the Oceans (EuroSea)” is a European Union Horizon 2020 Innovation Action running from November 2019 to December 2023. Through its ambitious vision and objectives EuroSea will, among other things, strengthen European and global coordination of marine biogeochemistry observations.

EuroSea generously supports the IOCCP Project Officer position for the time frame 2020-2022, and enables a number of key activities which help fulfil IOCCP Terms of Reference as well as implement relevant recommendations from OceanObs’19 Conference and Community White Papers. The activities are related to: (i) increasing the readiness level of delayed mode biogeochemical data products, (ii) enhancing ocean carbon flux observations (and estimates of their economical value), and (ii) supporting global coordination of marine debris observations. 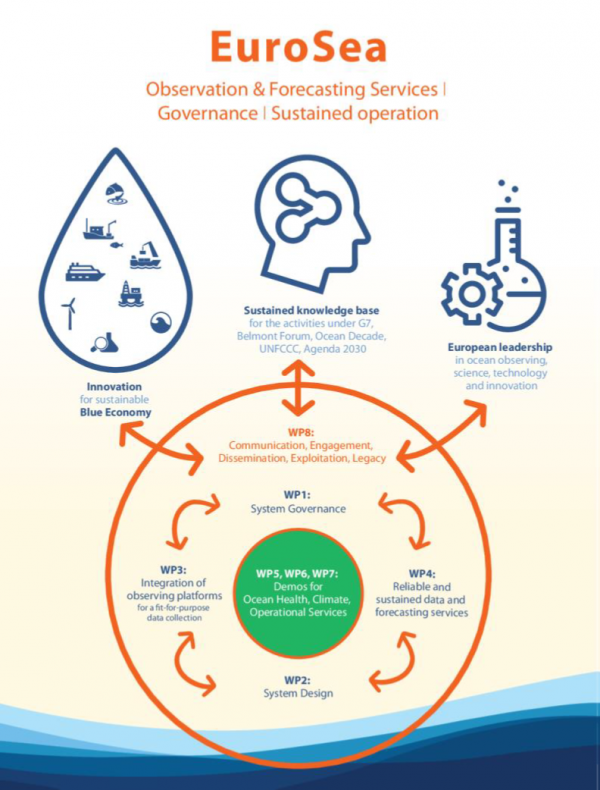 a is part of “The Future of Seas and Oceans Flagship Initiative” funded through the Horizon 2020 Blue Growth call (BG-07-2019-2020). EuroSea brings together key European actors of ocean observation and forecasting with key end users of ocean observations. EuroSea’s innovative demonstration activities are focused on operational services, ocean health and climate, where a dialogue between actors in the ocean observing systems will guide the development of the services.

The project is coordinated by GOOS Co-Chair and former Chair of IOCCP, Toste Tanhua (GEOMAR, Germany) and is run by a large, interdisciplinary and international consortium of 55 partners who will work together over the next 4 years with an allocated budget of € 12.6M.

EuroSea officially started on 1 November 2019. The kick-off meeting and the 1st General Assembly of the project took place at the Royal Belgian Museum of Natural Sciences (RBINS) in Brussels on 27-29 November 2019, co-organized by GEOMAR, RBINS, and EuroGOOS. IOCCP was represented at the kick-off event by IOCCP SSG members Benjamin Pfeil, Björn Fiedler, and IOCCP Project Officers Maciej Telszewski and Artur Palacz - all of whom are assuming roles of work package or task leads in this project. The kick-off meeting was an opportunity to discuss work plans within and across individual work packages. Detailed agenda and proceedings can be found in the kick-off meeting programme and in a list of meeting presentations. 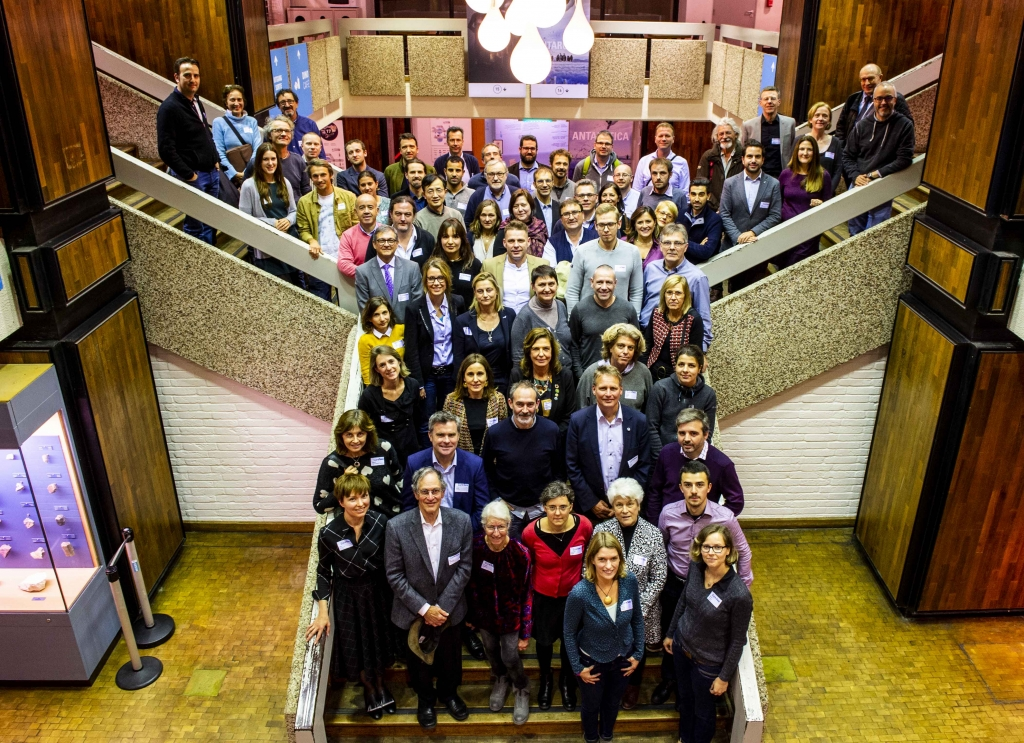 As part of EuroSea Work Package 4 (WP4), existing EOV synthesis products from in situ biogeochemical observations and high quality and long-term ship-based time series data will be fused to obtain optimal estimates of EOVs and derived quantities in support of ocean climate and ocean health monitoring.

A task, led by IOCCP SSG members Benjamin Pfeil (UiB, Norway) and Björn Fiedler (GEOMAR, Germany), will increase the technical readiness level (TRL) from 5 to 7 for two existing delayed mode biogeochemical data products (i.e. SOCAT and GLODAP) by creating automated quality control and data ingestion processes. A manual of operational implementation of SOCAT quality control and a manual of operational implementation of GLODAP quality control will be published in the second part of the project.

The project also initiates the development of a pilot data synthesis product based on ship-based time-series biogeochemical data which is currently a gap in the ocean value chain. The new product focuses on how to operationalize flow and availability of the Inorganic Carbon EOV data from ship-based time-series stations. The initial focus of this demonstrator is on the open-ocean observatories only. Issues with quality control and comparability between coastal sites would be far more challenging, beyond the scope of this initial pilot. The quality controlled data will eventually be integrated with GLODAP.

To this end, EuroSea not only provides funds for a postdoc position (Nico Lange, GEOMAR) but also funds for partial organisation of a large community workshop, which IOCCP has agreed to co-sponsor. Therefore, the next step towards the creation of the product will be a workshop which would discuss procedures for quality control of bottle data. Currently, PIs of several ship-based open-ocean time series sites from all over the globe have confirmed their interest in the workshop and data product development.

Enhanced estimates of ocean carbon fluxes and their economic value

EuroSea WP7 “Ocean climate indicators demonstrator” designs innovative ways to assess the role of the oceans and seas in Earth climate through new ocean climate indicators that will be determined through collaboration across project work packages, and verified based on performance. WP7 will also evaluate the economic value of the ocean carbon sink using a combined observing, integration, and dissemination approach. IOCCP Project Director, Maciej Telszewski, is a co-lead of this Work Package.

The project is performing quality enhancement of tropical carbon flux estimates through network optimization of the Tropical Atlantic Observing System (TAOS). EuroSea will develop information products linking ocean color surface data together with in situ data from autonomous platforms, such as Biogeochemical Argo, moored instrumentation and long-range autonomous surface vehicles (ASVs). A methodology to increase carbon data quality of the emerging Biogeochemical Argo network will be developed, using TAOS as a demonstration environment. The current Biogeochemical Argo data validation procedure, based on GLODAP data, will be extended by systematic crossovers with ASV measurements at the surface during the pilot study, thereby reducing uncertainties in CO2 flux estimates and ocean acidification indicators.

ASVs equipped with instrumentation for high-quality carbon measurements will be sent out on a multi-month pilot mission to integrate carbon measurements, using Time-Series stations in the North (Cape Verde Ocean Observatory – CVOO) and South Atlantic (Fernando de Noronha Observatory – FNEO) for validation. A similar research campaign has already successfully been run using Saildrones as part of the Atl2Med mission. EuroSea will explore the possibility together with Saildrone Inc. to implement this as a service nested in a global ocean observing framework, while developing adequate data dissemination pathways to end-users.

Furthermore, EuroSea will establish an ocean color satellite-based bio-regionalization of the tropical Atlantic and an upscaling of estimates of carbon fluxes over the tropical zone. Biogeochemical linkages between surface physical and biogeochemical constraints and carbon surface fluxes will be determined empirically through neural networks using a synergistic approach to data obtained from multiple in situ and remote sensing platforms.

Work in EuroSea will also enable an innovative evaluation of the economic value of the ocean carbon sink in deep convection regions via operational carbon assessments using a combined observing, integration, and dissemination approach. The task is focusing on carbon fluxes and uptake in the northwest Atlantic (Labrador and Irminger Seas) and the western Mediterranean, two very important areas for carbon uptake. A mixture of observing technology is applied augmented by deployments of Deep-Argo floats from EuroSea to generate observable and user-relevant marine indicators. Mechanisms involved in the storage and propagation of the carbon signal will be investigated. By making use of the quantified carbon variability, economists will then estimate the value of the carbon variability using three approaches, i.e. cost-benefit approach, cost-effectiveness approach, market-based carbon prices.

During IOCCP-SSG-13 in October 2018, IOCCP agreed to act on behalf of GOOS as a conduit for key international organizations and initiatives engaged in developing a coordinated observing system for marine debris. This short-term action, contributing to the GOOS Strategic Objective #10 “Impact of human activities on the ocean,” involves collecting information on the status and needs of marine plastics monitoring towards creating a Marine Plastics Debris EOV; and support for the establishment of global coordination of an Integrated Marine Debris Observing System (IMDOS). Through EuroSea, GOOS has committed explicit funds for IOCCP Project Officer to overlook the coordination work in this domain.

EuroSea will bring together technical experts leading individual global observing networks with leading authorities focused on marine plastic contamination (e.g. GESAMP, UNEP and initiatives involved in monitoring, sensor development, and ecosystem impact assessments in marine plastics) with the aim to establish global coordination of sustained observations of marine plastic debris as a new type of Essential Ocean Variable. This work will also establish a common sampling protocol for a mature element of marine debris monitoring building on recent advancements such as the publication of the 2019 GESAMP Guidelines for the Monitoring and Assessment of Plastic Litter in the Ocean.

After a series of meetings and individual consultations in late 2019, in early 2020 a first draft of a proposed “Action Plan for establishing global coordination of the Integrated Marine Debris Observing System (IMDOS): Phase I (2020-2022)” was prepared by IOCCP Office.

The document is a direct follow-up on the commitment expressed by GOOS during OceanObs’19 Conference which was made in response to a clearly articulated need for IMDOS as envisioned in the OceanObs’19 Community White Paper by Maximenko et al. (2019). The Action Plan is meant to identify specific actions which would enable implementation of ideas and recommendations from Maximenko et al. (2019), contributing to OceanObs’19 Living Action Plan, and being in concert with the related international initiatives led by UNEP, IOC-UNESCO, SCOR, Arctic Council, and GEO Blue Planet, among many others contributing to the mission of the Global Partnership on Marine Litter (GPML).

Establishing a globally coordinated IMDOS would fill the need for a coordinating body providing authoritative guidance on how to develop and evolve a global sustained observing system providing adequate data and information on marine debris in response to diverse stakeholder needs. IMDOS would thus occupy an important niche in a very complex and full landscape of organizations and initiatives involved in tackling the problem of marine litter pollution.

The draft Action Plan proposes a two-phase process to establish global coordination and operational capacity of IMDOS as a system which enables monitoring and potentially also assessing the risk posed by marine debris, while leveraging global coordination mechanisms for data collection and dissemination set up by the UN system and other organizations.

As of May 2020, the document remains subject to initial consultations among leaders of marine debris monitoring efforts and members of relevant GOOS structures. Further discussions were planned around the workshop Linking Data to Actions on Marine Debris for the Ocean Decade, which was however postponed due to COVID-19 and will be rescheduled according to the new venue and date of the UN Ocean Conference.

The IOCCP promotes the development of a global network of ocean carbon observations for research through technical coordination and communication services, international agreements on standards and methods, and advocacy and links to the global observing systems. The IOCCP is co-sponsored by the Scientific Committee on Oceanic Research and the Intergovernmental Oceanographic Commission of UNESCO. Read more…